Timo Werner might have flown home turning the miss over in his mind. Could he have put his foot through it? Perhaps that would have given Thibaut Courtois no chance?

Cesar Azpilicueta might have wondered if he could have done more to stop the header that led to the equaliser. Could his teammates have been first to the knockdown?

Chelsea might live to regret the possession and opportunities wasted in the opening half hour, and might come to reflect on this night as a chance missed, but the tie is alive. 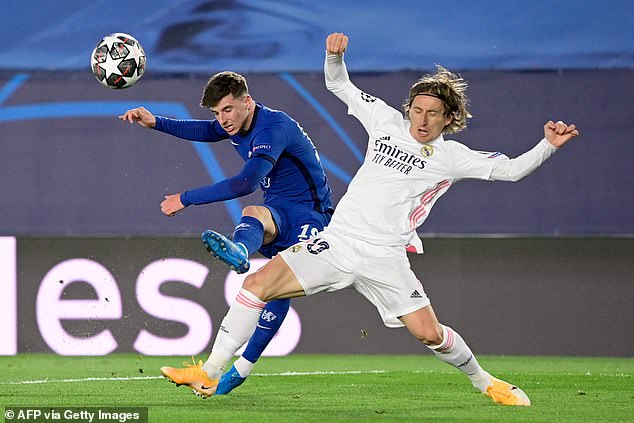 They have the away goal, thanks to Christian Pulisic and a clean sheet against Real Madrid Stamford Bridge and they will head for Istanbul in the Champions League final.

Easier said than done against illustrious and experienced opponents, of course, but they avoided Liverpool’s fate and this would have been the key to last night for Thomas Tuchel.

Ultimately they did it with an explosive and aggressive opening half hour and gritty determination in the second half.

The midfield tussle was always going to be vital to the outcome.

Luka Modric, Casemiro and Toni Kroos had dominated Liverpool when they came to Madrid earlier this month. Real’s midfield trio supplied the platform from which Vinicius could torment Trent Alexander-Arnold. 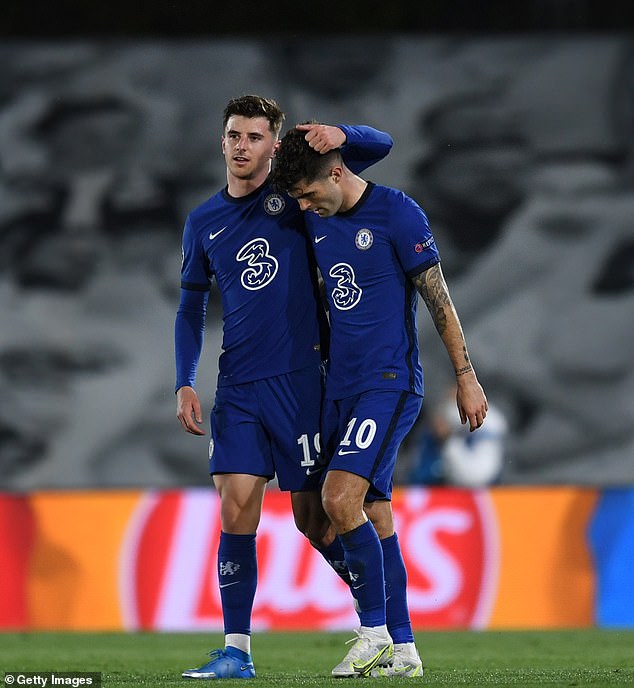 Mount, who has now played 100 times for Chelsea, has become integral to the side

Kroos was back after missing two games and Tuchel’s plan to avoid the same trap included Azpilicueta as a wing back on the right. He gave this formula a trial run at West Ham on Saturday and liked what he saw.

Real Madrid proved a greater examination and Chelsea’s skipper limped off, worn out in the second half, but the influence of Vinicius was limited thanks to his defensive instinct and Andreas Christensen, quick to cover on the right side of three central defenders.

Between them, they closed down spaces Liverpool had dared to leave open.

Tuchel’s team has a pleasing balance and Zinedine Zidane paid the compliment of changing his team shape to mirror his three centre-halves. It created a more fluent contest than anyone was predicting, partly because Real took their time to come to terms with it.

Vinicius flickered in and around Karim Benzema, the central striker, always searching to dart in behind the back line just as Pulisic did around Werner.

They occupied the three central defenders, stretched them and pulled them into unfamiliar positions, as N’Golo Kante, Jorginho and Mason Mount took an early grip in the centre of the pitch. 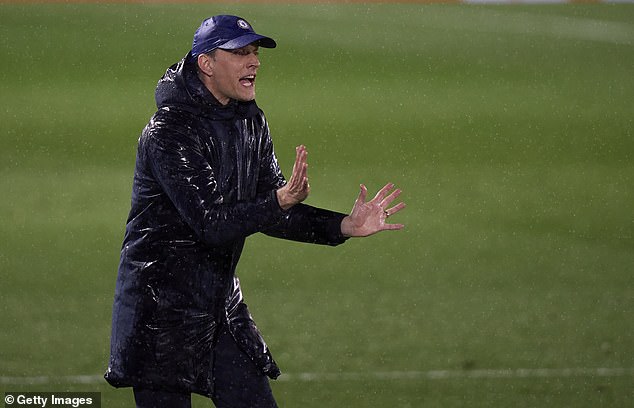 For almost half an hour Chelsea were on top, and Mount launched the break that led to Werner’s early miss with a shimmy and acceleration to carry the ball into Real’s penalty area.

It was a perfect example of his influence on the turnover of possession. His touch is sure and his mind is quick. More often than not, he is ready to play forward on his second touch.

He buzzes with energy, reads the rhythms of the game and has the vision and passing range to make it count.

Modric has carved a fabulous career with a very similar collection of technical qualities and diminutive frame, combined with a quiet resilience and steely will to win.

Whether or not Mount can rise to those heights remains to be seen. This was his 100th appearance for Chelsea, less than two years after he made his debut. He has become integral to Tuchel just as he is to Gareth Southgate and was to Frank Lampard.

He will not forget his landmark appearance in the torrential downpour with a close up of Modric, a master of his craft, who grew more into the game after a subdued opening.

Kroos and Casimero were more impressive as the game developed but Kante was the pick of the midfielders and the leader of Chelsea’s hustle with his boundless energy. 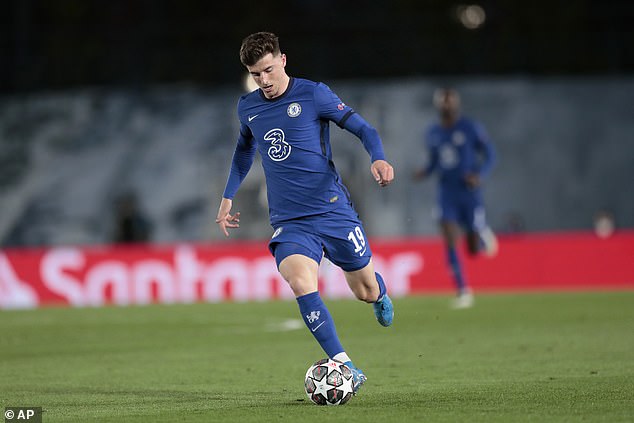 He led the hustle and Chelsea took the lead when Pulisic latched onto a long pass from Antonio Rudiger, but Zidane’s team had simply too much experience to go under without a fight.

As the rain pounded down, Chelsea lost a fraction of their intensity and with it their edge. Benzema, rattled the woodwork before volleying in a brilliant equaliser.

The second half opened with the sort of caution absent in the first. Perhaps the conditions played their part but Tuchel was not too unhappy to be making the short ride to the airport with the tie level.

Sergio Ramos might be back for Real Madrid. Eden Hazard might be ready to start. But Chelsea appear strong and together. They have depth and options. They are improving all the time.

Crucially, they are still in the tie. They landed the sort of result they came to Spain for and they are only a clean sheet away from their first Champions League final since they won the trophy in 2012.