Live Caption is one of the most underrated features to come to Android in years. Whether you’re hard of hearing, deaf, in a loud environment, or forget to bring your headphones, it automatically transcribes any audio coming from your phone for you. We long knew that Live Caption is on its way to Chrome as well, and you could even activate it via a flag in Chrome 88 already. And today, Google has announced that the feature is now available for everyone. 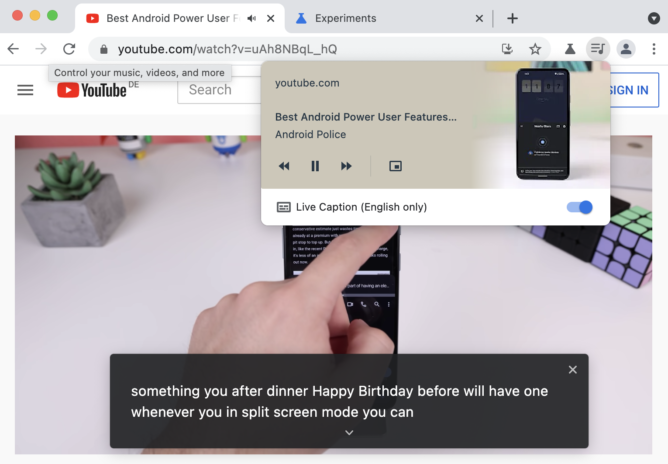 Live Caption automatically transcribes audio from your browser tabs, just like it does on Android, subtitling any audio content you could imagine, including video or audio chat services or your private Google Photos library. The captions are generated on your device, so audio never passes through any extra servers. It even works offline.

Google confirms that Live Caption is functional on Windows, macOS, and Linux. It only works with English for now, but more languages are coming. To activate Live Caption, you need to head to Chrome settings via the three-dot menu in the top right corner (⋮) and look for it in the accessibility section. Chrome OS support is “coming soon,” though you can already enable it via the chrome://flags/#enable-accessibility-live-caption flag.

It’s great to see one of Android’s more innovative features making its way into more Google products, making life easier for those hard-of-hearing and deaf. And regular folks can also benefit from it when they’re in loud environments without headphones or if they need to keep the volume down.

Google has announced that Live Caption is now officially available on Chrome for desktops. We’ve updated the coverage accordingly.

How to know when to quit

What is Anom? Messaging app at the center of FBI sting