The Redmi Note series is what really put Xiaomi on the map, and it played an instrumental role in making competitors like Samsung step up their game. The 10th generation of the lineup sticks with the company’s ethos of offering oodles of value for money and is probably the most significant generational jump we’ve seen in the series so far.

At the apex of the latest series is the Redmi Note 10 Pro Max. It’s the most expensive Note ever — starting from ₹18,999 ($260) — but it introduces some features that we’ve never seen before at this price, including a 120Hz OLED display and a 108MP camera. Barring a few quirks, it performs admirably and positions itself as one of the best budget midrangers on the market. However, it faces competition from its own kin, the Note 10 Pro, which offers arguably more bang for the buck.

Design, hardware, what’s in the box

The name makes it pretty clear that this isn’t a phone for those with small hands — it’s unapologetically huge. However, the concept of ergonomics wasn’t lost on Xiaomi when it was developing it. Despite sporting the same 5,020mAh battery unit as its predecessor, the 10 Pro Max is not only lighter (192g vs. 209g) but also slimmer (8.1mm vs. 8.8mm), and this does make it a bit more manageable to hold. 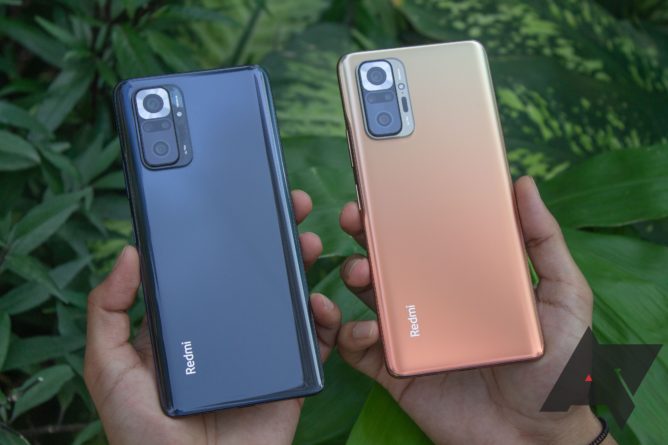 We had both the Dark Night and the Vintage Bronze colorways to play with, but I leaned towards the former for its discreet-yet-classy look. It is worth noting that apart from Dark Night, which has a glossy back, the other colorways boast of a matte finish. However, both finishes (glossy more so) are still prone to fingerprints.

Flipping to the front, the display is one of the Note 10 Pro Max’s most salient features. We’re not sure how but Redmi managed to ship a 120Hz OLED panel on a phone that costs just ₹18,999 (~$260), but it didn’t skimp — this is an excellent panel for the price. It offers great viewing angles, the saturation and depth of blacks you’d expect from an OLED panel, and a buttery-smooth 120Hz refresh rate. It gets plenty bright too, up to 1200 nits, according to Xiaomi. While I can’t attest to the number, I can vouch for sunlight legibility. The choice of panel also finally brings an always-on display to the Redmi Note series. 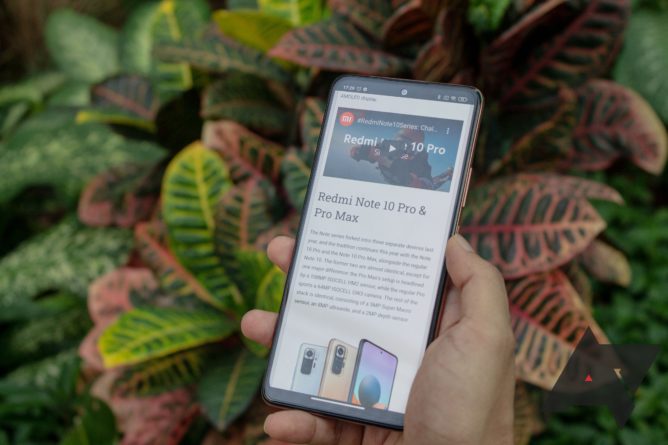 For what it’s worth, the punch-hole is the smallest I’ve personally come across, and it’ll soon be a part of your peripheral vision.

Probably to cut on costs, Redmi opted for a side-mounted fingerprint scanner instead of an in-display one. While I don’t have any problems with this (you can even configure a double-tap shortcut), I wish that the button was indented to make it easier to find by feel. The way it is now, it’s easy to confuse it with the volume rocker, which is also on the right side. The opposite side has a triple-card slot, while the bottom has a Type-C port, a speaker grille, and a microphone. Unlike most smartphones nowadays, this one has a busy top side, with a secondary speaker grille, a 3.5mm headphone jack, and an IR blaster that can control appliances like air conditioners and TVs. Kudos to Xiaomi for its allegiance to useful hardware features that other OEMs have phased out. 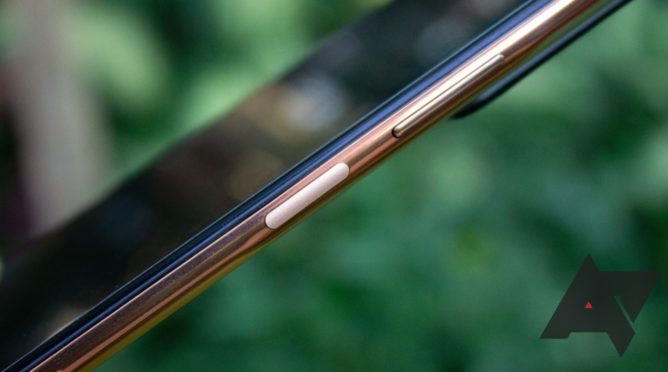 As for what’s in the box, there’s a silicon case, a 33W charger, a Type-A to Type-C cable, a SIM ejector tool, and a pre-applied plastic screen protector.

The Note 10 Pro Max has noticeably less bloatware than previous generations, but most of it is still uninstallable. The situation with system apps throwing ads doesn’t seem to have improved as much — I was welcomed by a pop-up notification from GetApps (Xiaomi’s own app store) when I first turned on the phone. Most of these spam notifications can be blocked, but Xiaomi ought to reassess how much it pesters its customers.

Otherwise, MIUI 12 is feature-rich and heavy with animations and visuals that breathe life into the phone. My favorites include floating windows, access to smart home controls in the control center, and a privacy check that strips location info and metadata of images that you share. Unfortunately, it doesn’t officially support the stunning Super Wallpapers. If you’re coming from a phone that offers a clean, simple UI, MIUI may overwhelm you at first. But with time, you’ll figure how to make the most of the vast feature-set.

The phone is powered by the Qualcomm Snapdragon 732G, which is a slightly souped-up version of the 730G, accompanied by up to 8GB of DDR4X RAM and up to 128GB of UFS 2.2 storage; our unit was a 6GB/128GB variant. You’d expect a phone of this caliber to handle basic tasks well, and it does. Even games like Call of Duty: Mobile and Asphalt 9 played well, but the phone does (understandably) struggle with heavier games like Genshin Impact. However, I have reasons to believe that there’s definitely some room for optimization. Once in a while, the phone skips frames while scrolling, there’s a noticeable lag when opening apps, and summoning the recent apps menu feels sluggish. This is something I hope Redmi addresses with a future update. 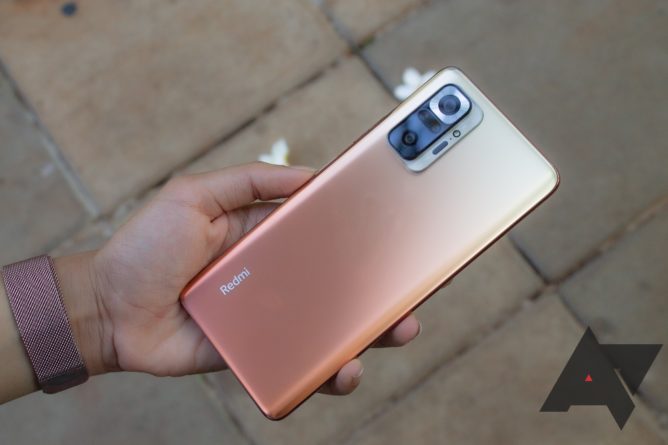 As mentioned earlier, the Note 10 Pro Max still retains the same 5,020mAh unit as its predecessor. It’s good enough for a day’s worth of use, even with an hour of gaming and several hours of audio/video streaming. If you’re not always looking at the screen, you could easily stretch it to a day and a half or more. There’s even an ultra battery saving mode that limits background processes and gives you access to only six apps — useful when you need to eke out as much screen time as possible.

The box comes with a 33W proprietary adapter that helps deliver juice relatively quickly. A full charge takes about an hour and 40 minutes whereas a charge to 50% takes about 45. This isn’t blazing fast — 65W fast charging on competing offerings has spoilt me — but it’s workable for a battery of this size. If you don’t carry around the charger, though, it’ll only be able to draw up to 18W from USB PD chargers.

A notable highlight of the phone is that it’s the cheapest one in the world with a 108MP sensor. While this doesn’t mean that it’s directly comparable to the likes of the S21 Ultra, the 12MP binned shots are certainly good for the price. They showcase good dynamic range that can salvage backlit outdoor shots. You may find details a bit lacking in daylight shots, but you can make use of the 108MP mode if you’re keen on cropping in later. Night performance is also satisfactory, and the camera doesn’t blow out light sources. However, it does have a hard time focusing in poor lighting conditions; I ended up with blurred shots on a few occasions. 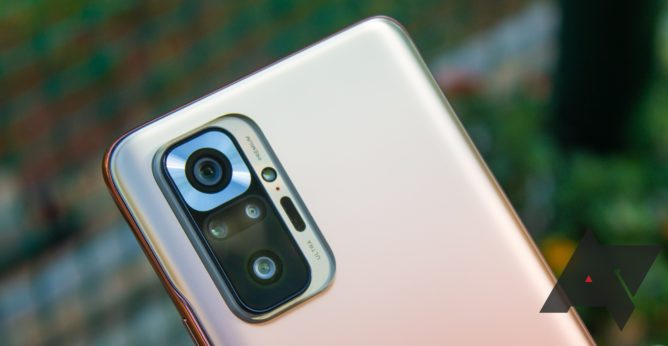 The 8MP ultrawide sensor does a respectable job outdoors, but the lack of a dedicated night mode makes it almost unusable in low-light conditions. Surprisingly, the 5MP macro lens isn’t terrible — it has autofocus and can take some interesting pictures. While I don’t think anyone needs a macro lens on a day-to-day basis, I wish more manufacturers followed Redmi’s footsteps to provide one that doesn’t stink. There’s also a 2MP depth sensor that supposedly helps in taking better portrait shots.

When it comes to video, the primary sensor can shoot up to [email protected] videos, but the lack of stabilization makes this option a no-go unless you’ve got gimbals for hands. It’s recommended to dial the quality down to [email protected], which also happens to be the highest setting you can shoot in using the ultrawide and the front-facing 16MP camera. What makes the videography experience a bit more enjoyable is the clone mode that lets you clone yourself in a video and even take freeze-frame videos like the one below.

Should you buy it?

Yes. The Redmi Note 10 Pro Max offers just about anything you’d want from a phone in this segment and then some more. The 120Hz OLED display, the above-average camera setup, long battery life, and Android 11 out of the box are all strong selling points. Honestly, it’s a bit surprising that Redmi managed to upgrade almost every spec of its predecessor without inflating the price substantially.

Having said that, it’s not a perfect phone. The software definitely needs a touch-up to reduce the random stutters — the high refresh rate display only makes this more apparent. And yes, I still don’t appreciate system apps that throw out intrusive or spammy ads. For what it’s worth, though, Redmi says that this will be among the first phones to receive the MIUI 12.5 update that will allow users to uninstall system apps. 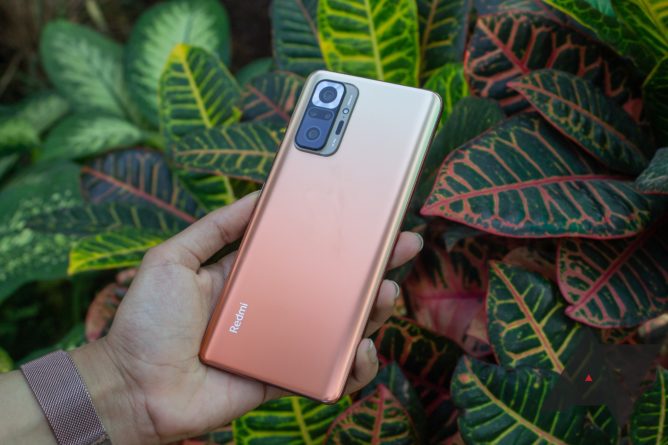 All in all, the Redmi Note 10 Pro Max is a great value. However, if you’re not going to take a lot of photos, I’d highly suggest you get the regular Redmi Note 10 Pro. That’s basically the same phone with a 64MP primary camera and a lower starting price of ₹15,999 ($220).