The best perks of Pixel ownership outside the camera are the exclusive software features like Recorder, which (as its name suggests) records audio and transcribes it in near real-time. Last year, the first signs of Google Drive-based backups were spotted. At the time, the bits of the feature that could be enabled claimed to point to a new recorder.google.com website, which didn’t exist. Well, the site is live now, and it’s promising the other half of the currently non-functional feature. 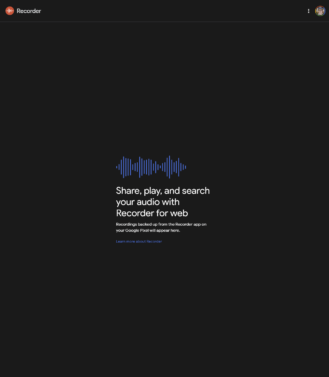 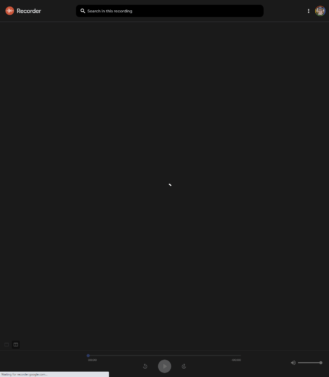 The site is up, but backups themselves aren’t live yet.

The site is currently just a landing page, but for a very brief moment while loading, you can get a glimpse of other UI elements along the top and bottom of the screen. Up top, you can see a text input field clearly labeled “search in this recording” to let you sift through a transcript’s content. At the bottom are playback and volume controls, five- and ten-second back and forward skips (respectively, a progress bar, and what might be a binary toggle of some kind on the left.

We’d be guessing, but I assume a list view of some kind for navigating recordings and displaying transcript content will be displayed in the center. That unknown toggle could control something about the transcript view, since it seems to indicate a switch between column types, or it may adjust other aspects of the interface — who knows.

A closeup of the UI elements visible for a split second while the page loads.

The particulars behind the new backup mechanism aren’t expressed by the site, which merely claims that “recordings backed up from the Recorder app on your Google Pixel will appear here.” However, many of the details were previously divined from an APK Teardown.

When it lands, the feature will allow you to back up your Recorder recordings to Google Drive with options for things like whether to allow it over mobile data. When deleting recordings, you’ll be prompted whether or not they should be also deleted from your backups and other synced devices or not. There’s even a backup indicator in the account switcher, if details haven’t changed since the feature was first demonstrated (all included in the screenshots below).

Currently, you can manually backup recordings yourself by sharing them to a target like Google Drive, but it’s hardly convenient and definitely not automatic.

The new site invites you to learn more about Recorder at the old feature promotion website, but it has yet to be updated to mention the backup feature, either.

With less than a week until March 1st (the first Monday of the new month, when Pixel updates usually land), and with a feature drop update expected this time around, I strongly suspect the feature will be formally announced as part of the March Feature Drop update for Google’s Pixels next week. Previously, Recorder picked up Assistant integration as part of last June’s Feature Drop.