By Joe Strange for MailOnline

Chelsea will be without Thiago Silva for the first leg of their Champions League clash with Atletico Madrid on Tuesday night.

There was optimism that the veteran Brazilian would be back for the crucial game in Bucharest after he was pictured back in training last week following a thigh injury.

But speaking at his pre-match press conference on Monday, manager Thomas Tuchel revealed that Silva will again be missing from his squad. 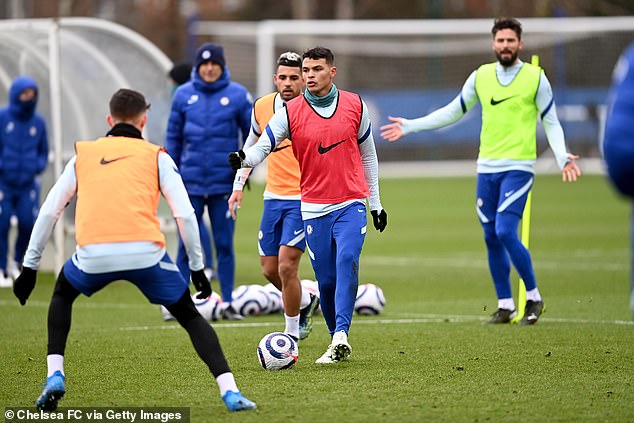 Silva, 36, has not played since suffering a thigh problem during a 1-0 win over rivals Tottenham on Ferbruary.

The former PSG star has missed four games with the injury, including Saturday’s 1-1 draw with Southampton at St Mary’s.

In better news for Tuchel, Kai Kavertz and Christian Pulisic are both fit to travel to Romania for Tuesday night’s first leg.

Havertz has not played since the win over Burnley on January 31 after suffering a knock in training, but he returned to training with Silva last week.

The German was not deemed fit enough to be involved against Southampton but he is now in contention along with Pulisic, who has recovered from a minor calf issue.

The American, who played under Tuchel at Borussia Dortmund, has made just one start under his new manager, having been hampered by fitness problems.

Tuchel added: ‘Very happy that both of them are in the group. They trained with us, no complaints, and they travel with us.’